As we go into Day 9 of the shutdown of the Federal Government, the media has gone to great lengths to do two things:

The two obvious exceptions to this are the networks of Fox “Ultra-Conservative” News and MSLiberalNBC. The rest of the networks, by and large, have been doing everything they can to appear as unbiased as possible in their coverage with varying degrees of success. The problem is that has arisen from this is their apparent inability to give any kind of news without some strange obligation to make this issue look like it’s the fault of everyone involved.

This shutdown is the fault of the intransigence of the collective House GOP. There’s no simpler or direct way of putting that. You can argue with me about that all you want, but you’re wrong. It’s not an opinion. It’s a pretty well-established fact at this point. Largely because the Speaker of the House has maintained a thin mask that he is, in fact, at the mercy of the Tea Party members of congress and he wants to keep his Speaker’s Chair. His usually well-focused messaging is everything but focused, as he proved on Sunday on This Week.

So it’s abundantly clear that the House GOP is doing exactly what President Obama indicated: They’re holding the Federal Government and the full credit of the United State hostage because they want to force the President to defund/repeal the signature legislation of his presidency. And if you launch into a tirade against me of everything that is wrong with the Affordable Care Act, you are only proving me more right. Want to know why? You’re justifying their political shenanigans simply because you don’t like the law. The one that was passed by congress and upheld by the Supreme Court. Oh, and by the way: It’s now become active for all Americans despite this very public and internationally embarrassing temper tantrum. Put another way, they didn’t stop shit. 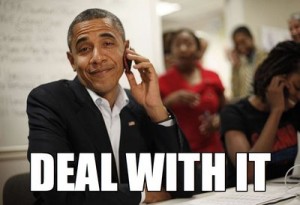 As proved by Jon Stewart’s interview on Monday night with HHS Secretary Katherine Sebelius, the ACA is far from perfect. And it’s also pretty clear that there are still some unanswered questions by this administration concerning the law as it stands. Sebelius looked like some automaton that was packed with less audio responses than Apple’s Siri as she delivered the same talking point over and over again, unable to answer a pretty straightforward question. But is that a reason to completely gut the law from the books? 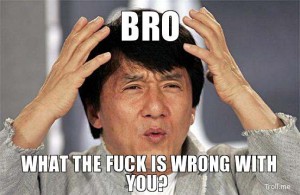 The way to deal with this – like, you know…ADULTS – is to work together to improve the law. That’s how this bicameral legislature is supposed to work. You do not embody the mentality of the terrorists that you espouse to hate so much and hold the functionality of the Federal Government hostage, place over 800,000 on work furloughs, and threaten the very credit of the United States because you didn’t get everything you want.