After Obama was first elected in 2008, I made a vow or sorts to avoid public political commentary. I realized that after several years of doing this, I was about as popular at parties as a leper. And rather than helping people understand the sometimes quizzical nature of American politics, I was only rustling jimmies and upsetting people. Some of them were grotesquely stupid people, but they can’t help that. The point was that I really wasn’t helping much. I was only adding fuel to the fire. I was also at the point where I was ready to take my position in the political middle again. It was my hope that by having a solidly blue track ahead of us for the foreseeable future that the country would pull back from the Right Wing that it had been dancing on for nearly a decade.

So while I was retooling for a less confrontational existence, I let the world go on as it wished. It wasn’t easy, and I have to say that I did manage to become presentable in public gatherings again and even managed to rescue most of my sense of humor from the pits of caustic cynicism. Not that I could ever truly let that go, but I was much funnier before I let it engulf me. But something you cannot shake after delving into the depths of the political cesspool are the facts that you learned on your journey. And unlike many of the commentators out there, I prided myself in allowing all facts take root and letting my conscience guide me.

As the years of the Obama administration marched on, I found plenty of failings with which to be dissatisfied. But I did take some comfort in knowing that at least it wasn’t Dubya. And though I knew that Obama had an enormous task to take on — rescuing the economy, hunting down bin Laden, closing Guantanamo, etc — I was confident that he could at least put us on the right track. But something has begun to take deep root in the Right Wing thought process that causes me to rethink my passive non-combative stance when it comes to political dialogue.

For lack of an official term, I call it the “Obama’s Deficit” fallacy. If you talk to anyone who reads or watches the news, I’m sure you’ve heard it. There’s a $17 trillion National Debt and it’s all because of Obama. Or, alternatively, Obama is responsible for a significant part of it. Here’s my simple response: If you believe the latter, you need to read or watch something that isn’t Fox News, RedState or NewsMax. Trust me, it’s for your own good. If you believe the former, you’re a certified fucking moron. Please stop talking because everyone knows, without hesitation, that you’re clinically stupid and possibly a sociopath. I keep a special cattle prod handy for such people if they get too close.

In the spirit of full honesty: Yes, Obama has added to the deficit. He did so in order to restart an economy that was teetering on full collapse, which would’ve had worldwide devastating results. He did no more or no less than every single country in the world that was having similar issues. But see here’s the catch: That economic recovery started at the end of the Bush administration. But it was one of the few things that Dubya ever approved that was a liberal idea to solve a problem they had not a clue on how to solve. Personally speaking, I thought it was a misguided idea. I would’ve much rather that money that went to Wall Street go directly to the American people so they could get themselves out of debt, but I’m not an economist. The point is that it it worked and the economy has limped back.

But here’s the thing that bugs me about those “it’s Obama’s Deficit” and “I miss Dubya” idiots; they have either the shortest political memory ever, they’re deeply susceptible to Right Wing Lies on rinse and repeat, they’re incredibly dishonest with themselves and everyone they talk to, or, more likely, some obscene mix of it all. Want to know where a good chunk of the current deficit came from? Bush’s wars in Afghanistan and Iraq and his tax cuts while it was going on. At the risk of sounding like a broken record, no leader in world history has ever cut taxes while going to war. Quite the opposite. Wars are fucking expensive. But for whatever reason, the Bush administration thought it best to have future generations shoulder the burden for his wars.

That is a fact. You can argue with me all you want to the contrary, but you’re wrong. And fucking stupid. Sorry, but there’s no nicer way to put it. Really fucking stupid.

I like charts that are fueled by facts. And you know what? The nice people at the Center on Budget and Policy Priorities took facts out of the Congressional Budget Office Report in 2013 and made some really nice charts you should look at. 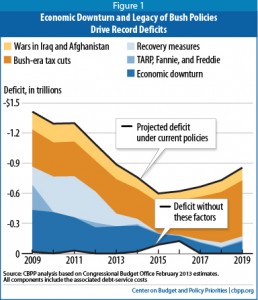 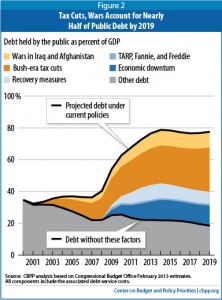 Look, I’ll be fair and even state, unequivocally, that the deficit isn’t all on Bush, either. The fact is that the national debt fell since the Truman administration pretty regularly until Ronald Reagan decided to start putting the spending of this country on a giant credit card. But I’ll let you do your own research on that one,  if you’re at all motivated to do so. Chances are if you made it this far into my post, you’re probably not a Tea Party Patriot.

And I am genuinely sorry if I hurt anyone’s feelings. But please do yourselves a favor and get facts from the boring folks who present them without commentary. Educate yourself not only on what the fuck is going on right now, but also how the fuck we got here in the first place. It’s easy for those not in power to throw mud, which in case you’ve missed it is an activity that the Right Wing excels. But they don’t have answers, and they’re not in  the least bit interested in giving you facts so much as a reason to hate those in power.